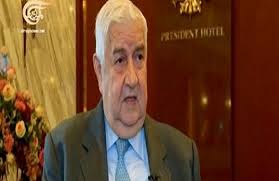 Syrian Foreign Minister Walid al-Moallem has warned  (SDF) against cooperating with the United States, vowing to punish them.

"They are Syrian citizens in the first place and we are dealing with them on this basis," Moualem said in an interview with the pro-Iranian Lebanese group Hezbollah and al-Mayadeen channel on Wednesday, when asked how the regime handled the Kurdish-dominated Syrian Democratic Forces, adding : "Cooperating with the foreigner, and I mean the Americans here, against homeland makes them bad citizen and they must be held accountable".

Muallem expressed his conviction that sDF controlled - areas should return to the control of the Syrian regime.