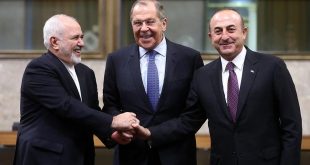 A joint statement by the foreign ministers of Iran, Russia and Turkey emphasized that the guarantors agreed to help convene the first session of the Syrian constitutional committee in Geneva.

The guarantors of the Astana format held a trilateral meeting on the margins of the 74th meeting of U.N. General Assembly.

The participants welcomed the finalization of the establishment process of the constitutional committee as a result of the completion of its composition at the last tripartite summit held in Ankara on Sept. 16.

The statement reaffirmed the strong commitment of the Astana guarantors to the sovereignty, independence, unity and territorial integrity of the Syrian Arab Republic and emphasized that these principles should be respected by all sides.

They expressed their determination to support the work of the constitutional committee through continuous interaction with the Syrian parties and the U.N. secretary-general’s special envoy on Syria.

The guarantors emphasized that this crucial step will pave the way for a viable and lasting Syrian-led, Syrian-owned and U.N.-facilitated political process in line with the decisions of the Syrian National Dialogue Congress in Sochi and the U.N. Security Council resolution 2254.

At a trilateral meeting in Turkey last week, the presidents of the three countries, Recep Tayyip Erdoğan, Vladimir Putin and Hassan Rouhani have clarified the road for the political process as they compromised on the composition of the committee.

Turkey, Russia and Iran have long been exerting efforts for the last 18 months for the establishment of the committee which will gather 150 figures from the regime, the opposition and the civil society on an equal basis. Each group will assign 15 men to write the new constitution and will decide on the modalities for a sound decision-making process.