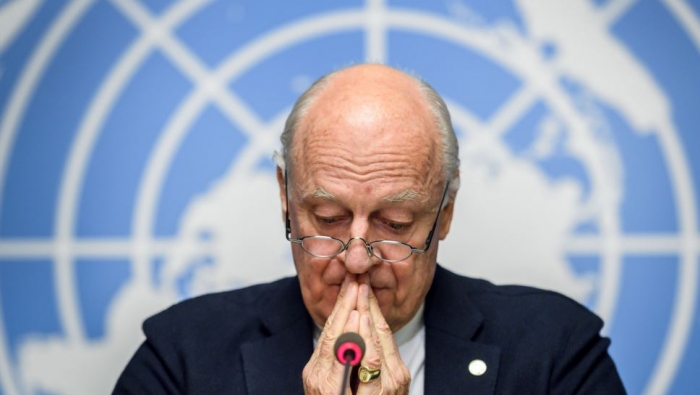 Agencies (Qasioun) – The UN Special Envoy to Syria, Staffan De Mistura, told reporters on Thursday that there are at least "10,000 members of the al-Qaeda and Nusra Front terrorist groups".

"No one doubts… that al-Nusra and al-Qaeda are terrorists and that terrorists identified by the UN need to be defeated… Indeed, the estimates of the al-Qaeda, al-Nusra, whatever name they want to call themselves, are more of less around 10,000 of them plus families," said de Mistura.

He also expressed his readiness to cooperate with the Syrian regime to ensure the safe evacuation of civilians from the Idlib province.

"I am once again prepared, personally and physically, to get involved… with the government cooperation… to ensure such temporary [humanitarian] corridors would be feasible and guaranteed for the people so they can then return to their own places untouched," the UN Special Envoy added.

Idlib province is one of Syria's de-escalation zones and a remaining stronghold for the Syrian opposition forces northern Syria.