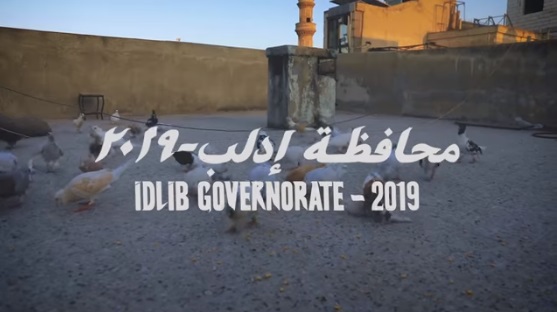 (BBC) - Angered by the suffering of civilians in Syria's war-torn province of Idlib, a young student there has come up with his own form of protest - rapping.

Twenty-year-old Amir from the opposition-held town of Maarat al-Numan rages against just about all those involved in the fighting.

President Bashar al-Assad, his Russian and Iranian allies, the extremist groups that dominate Idlib, and corrupt local officials all get a lyrical tongue-lashing from the riled rapper.

In the music video for his latest composition, On All Fronts, Amir strolls through the almost deserted, shattered streets of his hometown, fashionably clad from head to toe in black, spitting out the lyrics.

This is the playground of the Russian leader

Where you have to choose between the regime and al-Qaeda

Pick their side and you'll be safe from their rockets

Now see if all that talk at Sochi could stop it

For the music videos of Western rappers the bullet-holed walls of a bombed-out school would have to be constructed on a set. But for Amir, these signs of devastation are all too real.

Yet why is he writing rap songs about it all, instead of staging more conventional protests?

"I have a passion for writing and rap especially, because I see it as a political tool that allows me to freely take a stand against anything and to creatively accompany my words with the rhythms and beats that I want. I love this type of tempo, because I can talk about political issues that can't be raised elsewhere."

Amir's personal life certainly hasn't been much to sing about.

His brother was killed trying to cross the closed border into neighbouring Turkey and his family has frequently been forced to move home to escape bombing by Syrian government and Russian warplanes. He managed to escape to Turkey but soon felt compelled to come back.
"I returned because after the death of my brother, I became the eldest member of my family... and I have three-year-old siblings, and need to support them," he says.

"My father is almost entirely incapable of working by himself and needs somebody to help him."

Before he left Turkey, Amir bought a microphone and laptop with a little help from his dad.

These became highly-prized elements of a makeshift studio he created in his bedroom at his family's home. Then, after some friends taught him to use various sound engineering and editing programmes, he was up and running.

Softly spoken when not rapping, this earnest young man with a neatly trimmed black beard and swept back dark hair, sings of his loathing of the Syrian and Russian governments.

So go ahead: stifle people's breath as best you can

Regimes feeding on the bleeding of the common man

The next, another camp is bombed to annihilation

While planes drop terror from the skies, Amir raps about how Islamist extremists - like those from the powerful jihadist alliance Hayat Tahrir al-Sham (HTS), which the US and UN say is linked to al-Qaeda - have brought fear and corruption to the streets of Idlib.

Telling lies about what you took when you've got nothing left

While they're the ones in mansions, with their fancy cars and guns

Manipulating markets, talking trash to crush the working ones.
Amir says: "Here, every faction follows a different religious school and sees the others as blasphemous, because every doctrine disagrees with the others, and they use these divergences as a pretext to fight against each other."

And all the liars talk as if religion's on their side

One claims to be caliph; another judges wrong and right

Issuing fatwas [religious rulings] - that was an irony for sure

Take off your niqab [face veil]: this land is pure.

Amir, who studies graphic art by day and works in his father's shop at night, also resents how the conflict has led many schools and universities to close, leaving young people with little or no education.

Those educational institutions that have survived the bombs are often closed or put under pressure by extremists - a heartfelt lament that's strongly reflected in Amir's song.

Why should I be sad: for my future in this nation?

With student after student denied an education

Or should I be sad, for the teacher lost to me?

Who promised "We'll never lose hope"; now where is he?

The day after I interviewed Amir, he was forced to flee his home due to the intense bombardment of Maarat al-Numan, as pro-Assad forces stepped up their assault on southern Idlib.

But despite having to leave his home and much-loved recording studio behind, he firmly believes his rapping protests have been well worthwhile.

"It can play a positive role in the lives and on the morale of the people on behalf of whom I am speaking." he says.

"War is a very vicious thing, so it's a way of raising the voice of these people and speaking for them."