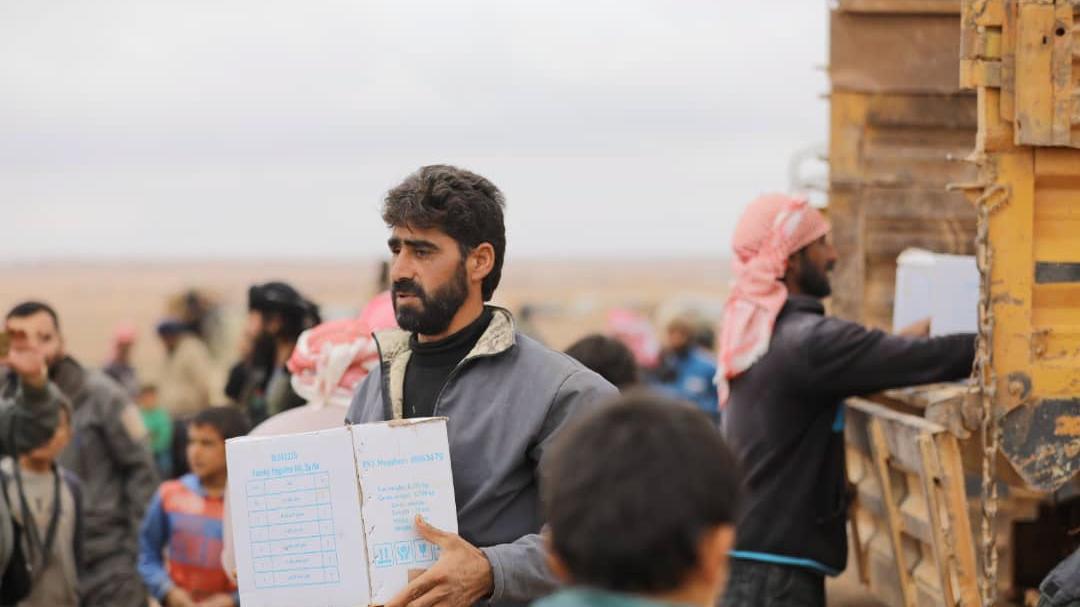 Three months ago, Hisham and his relatives sat down for a family meeting.

It had been four years since they fled an ISIS invasion of their hometown of Palmyra, riding south through the desert until settling in the remote Rukban displacement camp along the Syria-Jordan border. There, the family eked out a life in the desert with scarce supplies and harsh winters.

Now, some of them wanted to leave. After years living in a nominally opposition-held corner of the Syrian desert, they were returning to government territory.

Hisham’s cousin, his cousin’s wife and their children were planning to ride out into the surrounding desert, where they would board buses sent by the Syrian government to take them to Homs city. They knew the risks: in government territory, perceived opposition supporters could be arrested or disappeared. Much of Homs city was in ruins. Men of military age faced mandatory conscription.

So before they left, the extended family met and came to an agreement. Once Hisham’s cousin was settled into life in Homs, and if he found that it was safe to live there, he would send a message to Hisham telling him to leave Rukban.

Hisham has yet to receive that message.

His cousin’s wife and daughters tell Hisham he has been in the custody of government security personnel since arriving in Homs. With little money and few job opportunities for women in the conservative city, they rent a cheap apartment in a bombed-out neighborhood and communicate with Hisham in hushed tones over WhatsApp, fearful that security forces could be listening.

Hisham and thousands of other displaced Syrians still living in the Rukban camp now face a difficult decision. With supplies dwindling, few residents wish to remain. But stories of arrests and hardship from loved ones who have made the journey to Homs have complicated their decision over whether to stay or go. There is no easy answer.

Rukban residents who began returning to Homs aboard the bus convoys earlier this year were entering the unknown. There was little communication with friends and family members they left behind as they rode west through the desert, then went through government “reception centres” in the city.

About 24,000 people still live in the improvised tents and mud homes of Rukban camp, according to the latest UN figures. Most of them, like Hisham and his family, fled from towns and villages in eastern Homs province after ISIS invaded.

They had hoped to enter Jordan through a nearby border point but this was closed by Amman an ISIS-claimed car bombing in 2016 that killed several Jordanian soldiers stationed nearby.

Residents found themselves trapped in a patch of desert that had no infrastructure, no hospitals, schools, or nearby towns. A single road cut through the desert, part of an international highway stretching from Baghdad to Damascus.

The settlement lies within a 55-kilometre zone of nominal rebel control with the backing of US forces based at a nearby military garrison. Supplies came into Rukban from smugglers who traversed Syria’s eastern desert from government-held territory, but most of their routes were cut off late last year. Organised aid deliveries are rare. The most recent aid convoy, from the UN and Syrian government-affiliated Syrian Arab Red Crescent, reached Rukban in February, although another could arrive in the coming weeks, Unocha spokesperson Hedinn Halldorsson told The National.

The joint UN-SARC convoy “will assess needs and determine the exact numbers of those who want to leave, assist voluntary departures from Rukban and provide relief to those remaining”, the UN said in statement released on Thursday, without providing a timeline.

Two days after February’s aid delivery, Russia’s defence ministry said its forces would open a “humanitarian corridor” out of the camp amid worsening living conditions. Medicines and baby formula were already in desperately in short supply, what was available was prohibitively expensive. Some residents accused Russian and Syrian government forces of forcing them to leave the camp by blocking vital supplies for months.

More than 17,700 Rukban residents have left the camp via the “humanitarian corridor” since March, according to Mr Halldorsson.

Return, and then ‘fear’

Once in government-controlled Homs, former Rukban residents are held in government-run “reception centres” that they call “schools” as these are based in converted school buildings. In the schools, they undergo security checks and settle their statuses before being released, according to the UN, although Rukban residents tell of relatives kept there for weeks.

There are rumours of torture but these are nearly impossible to confirm. Like other areas of Syria retaken by pro-government forces, communication is limited. Even after leaving the schools, returnees are cautious about communicating by phone, according to relatives and friends in Rukban.

And though the UN says returnees are “being assisted and serviced by mobile clinics”, their relatives tell The National that assistance drops off once they leave the reception centres.

“They get some food aid in the reception centres in the school buildings,” said Hisham, but he has not heard his relatives mention any other assistance after leaving the centres.

Taha, whose friend Samir rode a government convoy to Homs three months ago, said he still keeps in touch with him by phone. The two young men spent long evenings drinking tea and chatting in Rukban and remained close even after Taha sneaked into northern Syria on a motorcycle and Samir left for Homs.

“There were something like 15 days where I didn’t hear from him after he left Rukban,” said Taha. Samir was going through security checks at one of the reception centres. When Samir finally made it to Homs city, he found a job as a construction worker. It paid just enough for him to rent a home for himself and his elderly father. But Taha only heard Samir speak of “two or three” times he received UN assistance since reaching Homs.

Khaled, another Rukban resident, said his relatives spoke of receiving UN aid “during their time in the schools”. Afterwards, they told him, there was “very little aid – and it came one time only” two months ago. They received some simple furnishings and food, Khaled said.

Watching from afar in Rukban, Hisham has decided not to make the journey to Homs. There is little hope of reaching his hometown of Palmyra, where former residents say they are forbidden from entering. There is little news about his cousin's condition, or why exactly he has not been released. Even the language Hisham’s relatives use to tell him about the situation is vague, as they fear security forces in Homs could arrest them for speaking about it.

“When they talk about him, they don’t say he’s ‘detained’,” Hisham said. “They say ‘he’s still in the school’.” His relatives have told him to stay in Rukban with his wife and four children.

“They are afraid,” Hisham said.